Understanding the concept of Five Bodies or Five Dimensions 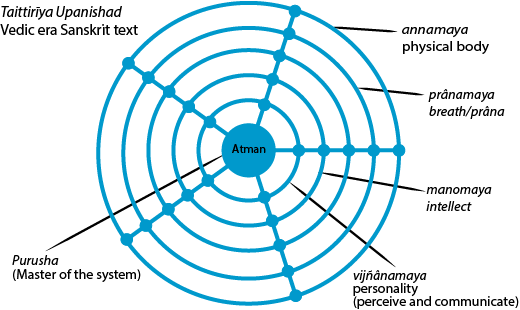 There is a conceptual difference between koshas and dimensions. In the Panchamaya model, the word ‘kosha’ is used as a way to explain the concept of us humans, being more than just our physical body. Others refers to it as “dimensions” when applying the concept of yoga as a holistic model of healing, self-discovery and self-realization.

According to the yoga tradition, from denser to finer, we have five bodies: annamaya (food body),  pranamaya (energy body), manomaya (mind body), vijnanamaya  (wisdom body), and anandamaya (bliss body). The late TKV Desikachar (1938-2016, yoga teacher and author) , explained maya as “something that is all-pervading” furthermore, disagreeing with the concept of kosha as something that separates or encapsulates which is the translation of kosha in relation to organs.

Desikachar sets his teachings apart from many commentators on the Taittirîya-Upanishad (one of the older philosophical-religious texts of Hinduism) adding that “this word is misleading, because it gives the impression that each dimension exists separately from the others.”

The imagery often associated with the concept of kosha is the layers of an onion that may be peeled away from each other or the Russian nesting dolls of decreasing size placed one inside another.

The Panchamaya Model implies something different, these five dimensions are all present, all the time, in each part of the human system, even in each cell of the body (refer to figure Desikachar’s depiction). What happens on one level or dimension of the human system thus affects the others. Because each dimension is connected to the others so profoundly, it is possible to influence problems in one dimension by working on the other dimensions.”

The Pranamaya  dimension, nourished by the quality of our breath, is our physiology, how things work, our vital energy, “that which supports the physiology of the body.” Prana means energy, but not energy in the usual Western meaning of the word. Rather, prana is the life-force, the vital energy which flows through and enlivens all our physical systems. The breath is the most physical expression of prana, and prana is closely related to the breath. Breath awareness and breathing practices, known as pranayama, increase and facilitate the flow of prana in the body and balance the flow of the life force to all the physical systems This dimension has a subset of five different winds or vayus.

Chase Bossart, director of the Yoga Well Institute and a long time personal student of TKV Desikachar, explains the five vayus in a very succinct way:

In the Pancha Vayus Model, prana in different areas of the body is known by different names because prana in different parts of the body supports different functions. Prana in the chest area is called Prana Vayu. This area is considered to be the seat of the mind and the emotions. Prana in the abdomen is called Apana Vayu and is responsible for reproduction as well as the elimination of bodily waste. The prana located in the area surrounding the navel is called Samana Vayu and governs digestion. The prana in the throat region is called Udana Vayu and governs communication. Lastly, the prana governing circulation and the transportation of nutrients throughout the whole system is called Vyana Vayu, and this prana is located throughout the body, particularly the joints.

The second dimension, the Annamaya, nourished by food, is our anatomy, gross body. The third dimension, the Manomaya, our thinking dimension, our intellectual mind, how we perceive, understand, and choose through our five senses, how we maintain attention and stay open to receive information. The fourth dimension, the Vijñānamaya, is our personality, our behaviour, attitudes and belief system. This refers to the nature of our pre-dispositions of conditioned responses, our drives, and inclinations, who we really are, our true character, influenced by our biology, our biography, our society and our innate tendencies. This dimension of ourselves determines how we take and understand things in our unique way, our discernment capacity. And finally, the fifth dimension of our being, the Anandamaya, the more subtle is related to our emotions.

Sadhguru, the Indian yogi and author says that when we “touch” this layer we feel bliss, eternal joy. This dimension is about relationship to family, to other humans, to society and external environments but ultimately, beyond the experience of joy that comes when we connect to the things that bring that feeling lies our deepest aim to develop a conscious connection with our source and to realize that eternal joy that comes with that.